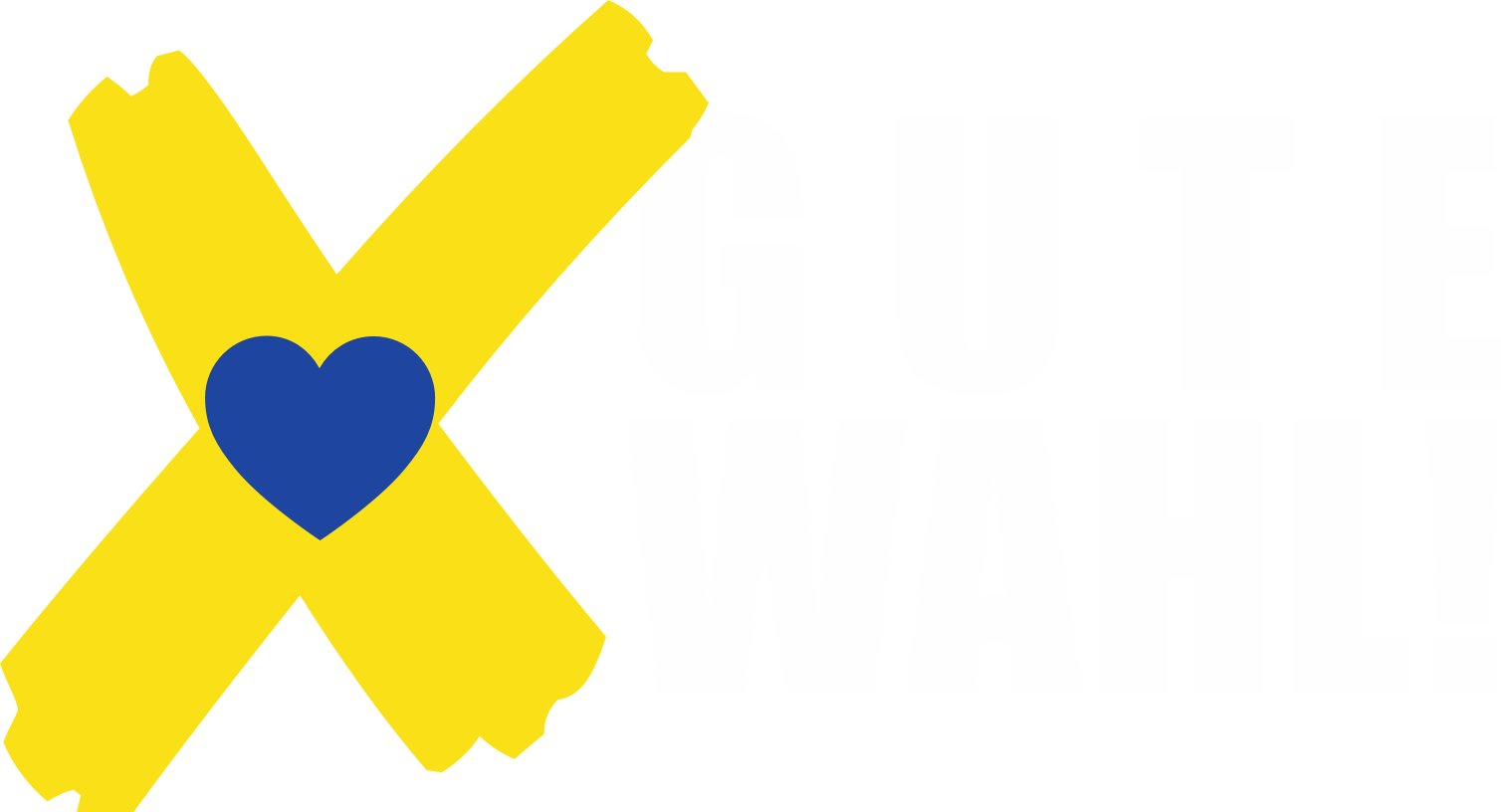 Your choice can change Europe!

What does the lagging Bundestag election, a national election, have to do with Europe? Much more than one might think. After 16 years with Angela Merkel at the top of federal politics, a new Chancellor was elected this autumn. This change will inevitably have an impact on the European Union, intra-European relations as well as the future of European cooperation.

Although none of the potential candidates for chancellor questions the European idea as such, the election programmes of the parties contain major differences when it comes to Europe. Because the most pressing issues of our time can only be solved at the European level, we want voters to be aware of how important their voting choice is for the future of Europe.

That is why we have featured people from all over Europe in our campaign. Just like us, many Europeans were eagerly awaiting the results of this election, and are hoping that it turns out to be a good election – for the European idea and the values it embodies!

With our EUROMAT you could find out in just a few steps whose election programme best matches your views on European issues.

Whose European policy was the best choice for you?

Let's go to our EUROMAT!

You want to stay up to date on tools like EUROMAT and other Pulse of Europe actions? Simply subscribe to our newsletter:

So you too could make others aware of the European dimension of this election!

To make sure that as many people as possible could realise how important their vote was for the future of Europe, we invited you to become a part of our campaign. 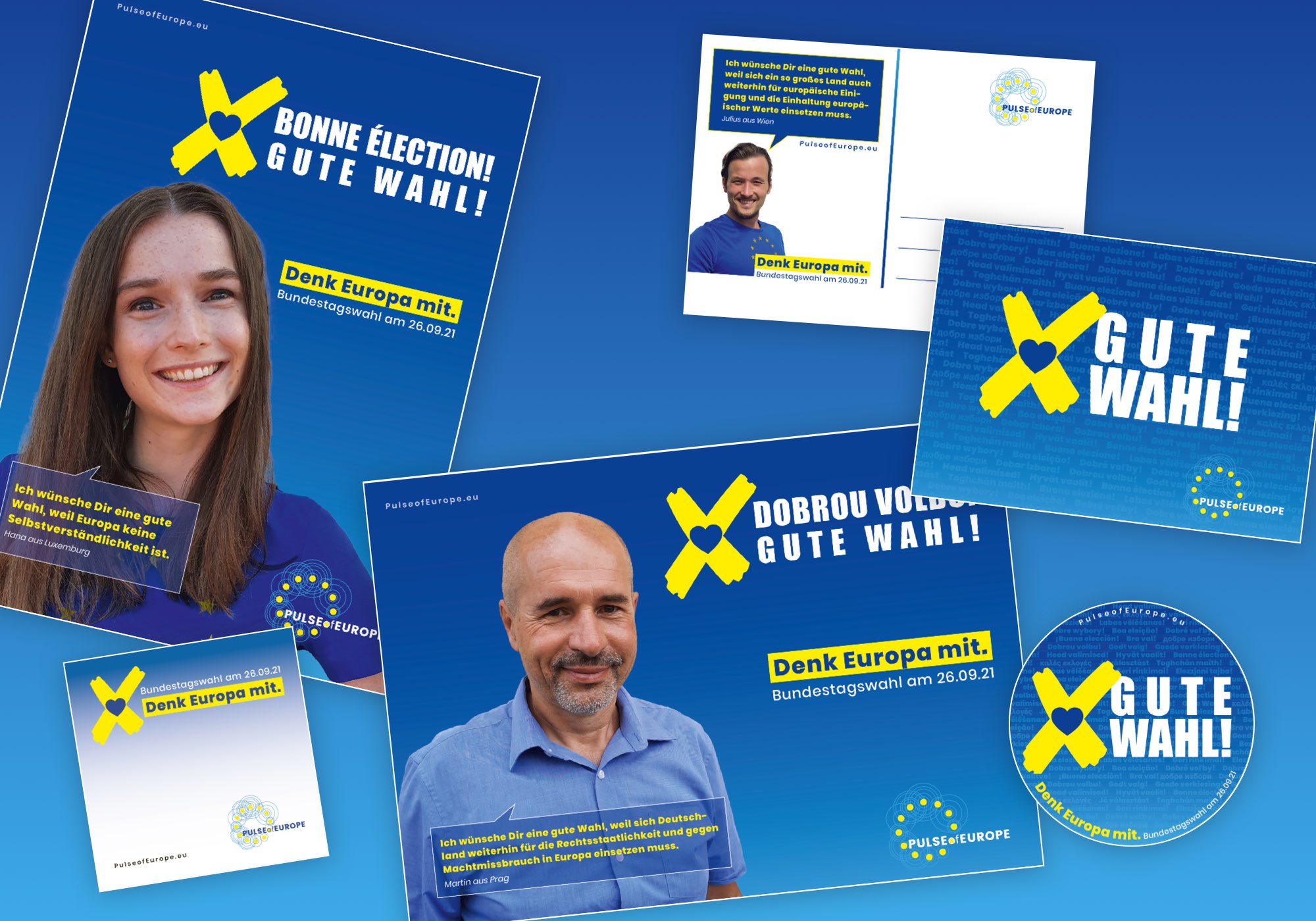 Our campaign is independently run and supported exclusively by committed European citizens.

In order to be able to continue to stand up for the future of Europe, we are dependent on the support of many like-minded people.

Your donation of even 10 € can make a meaningful contribution to this campaign and give the European idea more visibility!

We provided free print files for all materials. They could be easily reproduced at home, on the office printer, in the copy shop around the corner or in most online print shops. We also provided a social media package so that you could use your own social media accounts to spread our European campaign. This way you can get even more European greetings out there on your own! 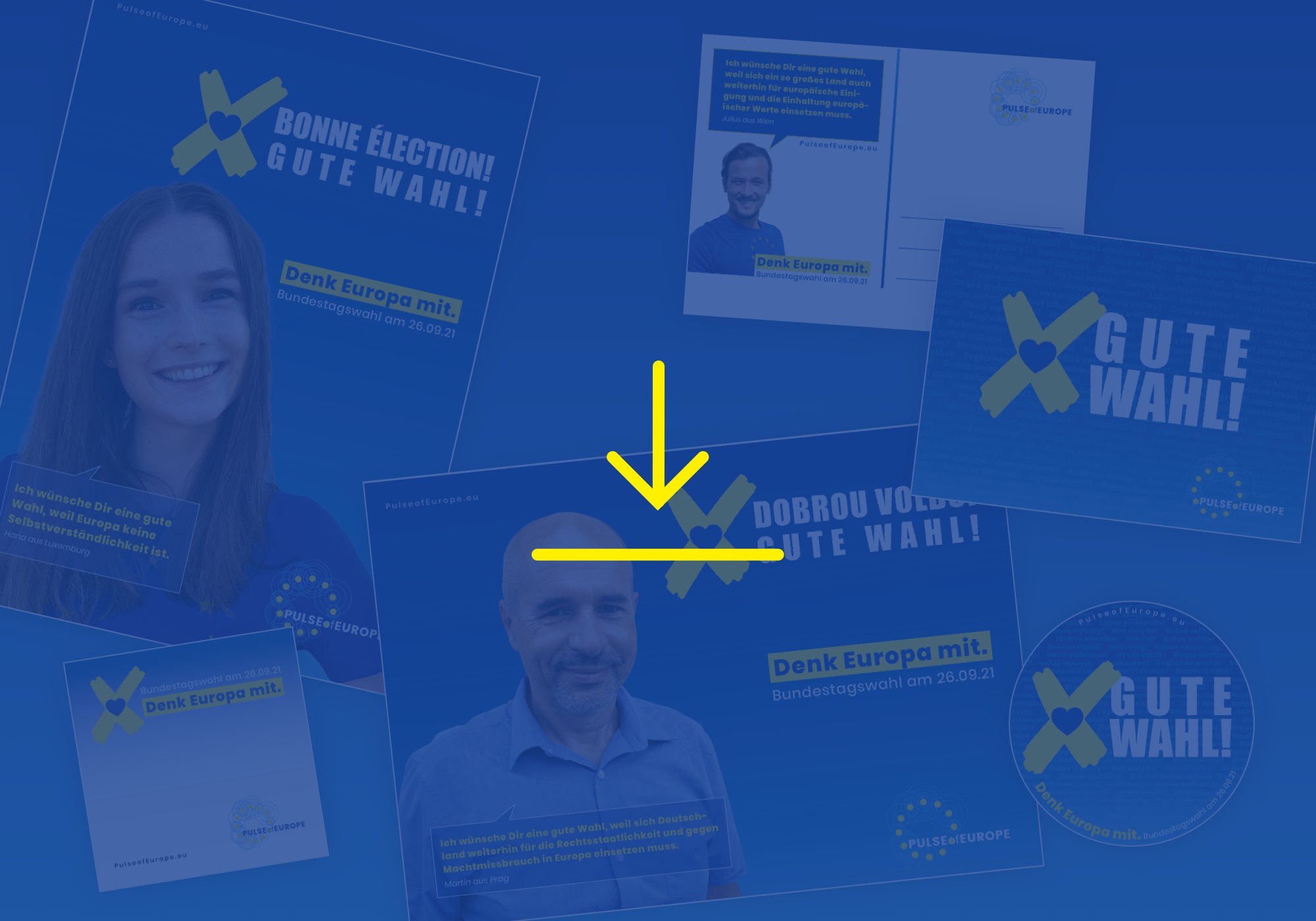 Let's be the Pulse of Europe!

Let’s be the Pulse of Europe!

Pulse of Europe is an independent and non-denominational citizens’ movement that is non-partisan and unaffiliated with any interest group. Pulse of Europe became known through large rallies all over Europe. Our rallies aimed to amplify the European pulse within our cities and take a stance for our common European identity and for European solidarity.  To this day, many thousands of committed citizens want to contribute to a united, democratic and peaceful Europe. A Europe in which respect for human dignity, the rule of law, liberty and tolerance are self-evident foundations of the community.

Since our founding, volunteers have come together in more than 70 German and other European cities. Our projects and campaigns help to strengthen the dialogue between politics and civil society. We set issues, make demands for reforms and for a better Europe. And we invite our fellow citizens to get involved with us – for our common future in a united Europe.

More about our activities

Always up to date

You would like get our latest news and thus always be up to date? Then subscribe to our newsletter and and stay in the loop.

You can be part of it too!

We need as many people as possible to make the European pulse visible and audible. Join us now!